You may be surprised to know that there are several alternatives and best ways on how to get rid of nose hair. Consider yourself lucky if you have short nose hair that won’t protrude and be visible to others.

But if you do have long nose hair, there are some ways to deal with the issue. You may have to dedicate your time to trim the hair but it is going to worth it. 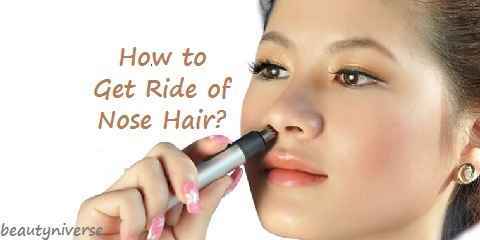 Here are some alternatives to get rid of the nose hair.

The first one is to use the scissors, which can be the easiest, safely and the least painful method. Not to mention that the scissors are also inexpensive. With scissors, you can arrange and manage the length so it won’t be too short that will lead to ingrown nose hair issue.

However, you need to choose the right kind of scissors with rounded edges that won’t hurt your nose. Using nail or cuticle scissors aren’t right because they are pointy – and they are designed to cut thicker stuff than the hair strand. Some of the nose scissors are coming with extra features so you don’t have to worry about anything.

Another alternative is to use the tweezers. Tweezers are basically easy to use – you simply pinch the strand of hair with the tweezers and pull it. Yanking the hair is the easiest way to remove the hair. Tweezers aren’t only easy to find, but they are also inexpensive. Even the simplest tweezers won’t cost you a fortune and you should be able to find one easily – at drugstores or beauty shops.

Unfortunately, pulling the hair can be quite painful. Imagine yanking your hair – not really a nice experience, huh? And don’t forget that pulling the hair has the possibility of suffering from ingrown hair. If you want to avoid the ingrown hair problem altogether, you should use scissors instead of the tweezers.

There are still other manners and methods that you can do for removing the nose hair, such as:

Nose trimmer is designed to specifically remove the nose hair, and with the electric method, you can achieve satisfying result in shorter time. Don’t worry; the trimmers are designed in precision with safety features that won’t hurt you.

How Fast Does Armpit Hair Grow: Knowing the Facts

The device should be inserted into the nose so the blades can cut the hair strands efficiently. The blades themselves will be covered so they won’t be exposed or cut your nose. However, this device is commonly costlier so you need to prepare extra budgets.

Do you know that there is a special wax for the nose? Yes, there is! When compared to other methods, you can expect shorter nose hair for longer time. It would be ideal for those who don’t want to remove the nose hair often.

However, waxing can be quite painful. Not to mention that you should get yourself used to the implementation to really produce a maximum and satisfying result.

Removing the nose hair can be done in several alternatives. Once you know how to get rid of unwanted nose hair correctly and properly, you only need to choose the right one for you.